In 2017, we decided to put our expertise at the service of social commitment. Thanks for Nothing is born out of our desire to link the world of contemporary art and that of engagement but also to take action and stop being only a spectator of the situation and the reality of social inequalities. We wanted to become actors of solidarity and change. With Thanks for Nothing, we want to demonstrate that we all have the means to act and that we can all contribute to the construction of a fairer society. 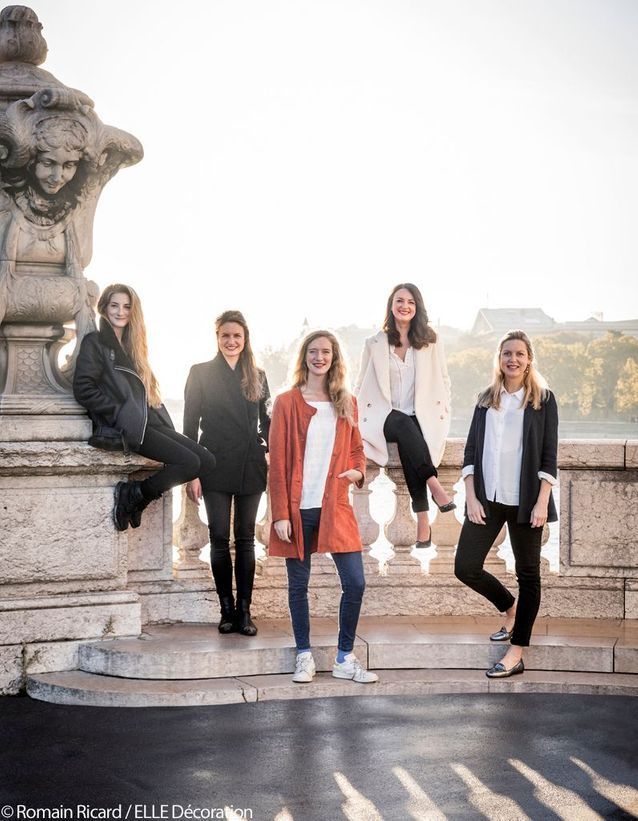 Since 2018, Marine has directed all Thanks for Nothing projects, teaches at Sciences Po and is a member of the Board of Directors of the Primo Levi Center. From 2015 to 2018, Marine was Director of the Galerie Chantal Crousel, in charge of development, relations and sales to institutions and international collectors. From 2012 to 2015, Marine directed relations with FIAC collectors and institutions. For 3 years, she developed the entire VIP program in partnership with 200 institutions, foundations and private collections internationally. From 2009 to 2012, she was in charge of public relations and patronage at the Centre Pompidou-Metz, where she developed the policy of fundraising and coordinated the official inauguration of the venue, the first cultural institution of this scale to be relocated in France. In 2008, she was a special assistant to Robert Fitzpatrick, Director of the Museum of Contemporary Art in Chicago, where she analyzed the structure of American cultural institutions.
Marine lives and works in Paris, France.

From September 2020, Blanche is the Artistic Director of the Art Explora Foundation. From 2010 to 2020, Blanche developed and directed the FIAC’s Hors les murs programmes, which included tours of artworks presented at the Tuileries, the National Museum of Natural History, the banks of the Seine, Place Vendôme, the Petit Palais and the Maison de la Radio. Each year, these tours offer more than 60 works of art, accessible to all and installed in the public space. Blanche also directs programmes of performances, dance, artists’ films and conferences in collaboration with major institutions such as the Louvre Museum, the Palais de la Découverte, and the Ecole Nationale Supérieure des Beaux-Arts de Paris. She has also been associate curator of the performance programme “À Rebours” at the Silencio and “L’Eveil du Printemps” for the Toulouse International Festival, le Printemps de Septembre. Blanche lives and works in Paris, France.

Since 2015, Anaïs manages the patrons’ program of the Museum of Modern Art of Paris. She is in charge of the development of individual sponsorships of the museum and partnerships of the Friends Society with institutions and collectors, both nationally and internationally. In 2014, she joined the Galerie Max Hetzler and coordinated their launch in France, from the opening of the gallery to the production of exhibitions and sales. In 2012, she assisted Marie-Laure Bernadac and Pauline Guelaud in the contemporary art department of the Musée du Louvre and worked on exhibitions’ production from 2012 to 2015, most particularly on Michelangelo Pistoletto’s exhibition in 2013. In parallel, Anaïs was involved in different nonprofit cultural organisations as L’Envolée Bleue and OArt, supporting students in building artistic events in Paris. She has developed strong relationships within the cityhall of Paris and founded a public art gallery where she exhibited works of very young artists, such as the students of L’Ecole des Beaux Arts de Paris (Atelier Tayou).
Anaïs lives and works in Paris, France.

Anne-Sarah Bénichou is the director of the eponymous gallery she founded in the Marais in Paris, after a double training in Art History and Literature as well as several experiences in the art market, in auction houses as well as galleries. She represents French and international contemporary artists, both emerging and established. She organizes solo or group exhibitions in partnership with curators, philosophers and writers, which often come with catalogues. She is also a member of the board of the Paris Gallery Week-end and the board of directors of the CPGA.

Anne-Hélène Decaux is Director of Sotheby’s Paris Contemporary Art department. A graduate of the Sorbonne, she began her career in Geneva working for the Aga Khan Trust for Culture before moving to New York and later returning to Paris to take up her current role at Sotheby’s in 2015. Since then, she has played a key role in securing important private collections and overseen several ground-breaking single-owner Parisian sales. Now predominantly a specialist of the Post-War avant-gardes, she sits on the acquisition Board of the Musée d’Art Moderne de la Ville de Paris.

While completing a double degree in Law and Art History at the Sorbonne University and at the Ecole du Louvre, Aska interned at the communications department of the Louvre Museum and at the National Museum of Modern Art, Centre Pompidou where she worked as an assistant curator to Françoise Guichon, head of the design department, on the exhibition “Martin Szekely – Draw no more” (2011).
After completing a Master of Contemporary Art History at the Sorbonne where she wrote a thesis about the emergence of Japanese avant-garde in the 1920’s, she assisted Marine Van Schoonbeek at FIAC Paris International Contemporary Art Fair, managing relations with institutions and VIPs.
She was the recipient of the Bridgestone Foundation Research Scholarship in 2013 and received a Master of Arts from the Graduate School of Arts and Sciences of the University of Tokyo, where she researched the emergence of performance art in the frame of the Sogetsu Art Center in Tokyo from 1962 to 1964.
After graduating, she was employed as Manager of Operations, International Development and Children’s Programming at 21_21 DESIGN SIGHT – Issey Miyake Foundation in Tokyo.
She then became Head of Visual Arts at the Institut français du Japon between 2018 and 2020 where she managed the contemporary art projects working closely with several Japanese and French cultural institutions and curators, as advisor to the Villa Kujoyama selection committee and the Cultural Counsellor to the Embassy of France regarding visual arts.
Aska joined Thanks for Nothing in octobre 2020.
She now lives and works in Paris, France.

In 2016, Bethsabée was appointed by the Bettencourt Schueller Foundation as associate curator of Jean de Loisy for the exhibition Double JE, handcraft masters and artists at Palais de Tokyo. From 2015 to 2016 she worked at Palais de Tokyo as production manager for more than six exhibitions and artistic projects (Korakrit Arunanondchai, Patrick Neu, Lasco project….). In parallel, she curated a series exhibitions including Beyond 1.1 at Tanja Grunert Gallery in New York. In 2014, Bethsabée joined FIAC and worked in the department of the exhibitor’s relations for the 2014 edition. During her studies, she worked with different nonprofit organizations such as Fondation d’entreprise Ricard and Watermill Foundation (New York). From 2010 to 2011, Betshabée worked for Georges-Philippe et Nathalie Vallois gallery where she organized fairs and outdoor exhibitions.
Bethsabée lives and works in Paris, France.

Charlotte is currently leading the development and launch of the Zurich Art Weekend. This major cultural event, initiated and organised in collaboration with the most important museums, art centres, and galleries of Zurich, will take place from June 8th until June 10th 2018, the weekend preceding the opening of Art Basel. In 2015, Charlotte co-founded a social impact-focused venture in Turkana (Kenya), one of the poorest and most remote regions of East Africa. It encompasses Learning Lions, a nonprofit coding school, Digital Lions, a fairtrade IT-outsourcing agency and Startups Lions, a social incubator for digital startups. Thanks to her engagement on the field, she developed a first-hand knowledge of sustainable development challenges. She previously worked for 5 years as director of research and exhibitions & external relations manager at Blondeau & Cie, Geneva. This advisory office in impressionist, modern and contemporary art sources historical masterpieces for museums and major collections.
Charlotte lives and works in Zurich, Switzerland.

Gaëlle Porte is a curator and currently a project manager at Council where she develops a research residency since 2019. Before then, she curated and produced 6 exhibitions between Paris and New York, with a focus on young emerging artists. Prior to that, she was based in New York and worked 3 years as a studio manager for the artist Prune Nourry. She also was an artist liaison for artists such as Jenny Holzer, Haegue Yang, Roni Horn and Bill Viola at Kukje Gallery. In addition, Gaëlle managed The Clark Institute Masterpiece Tour exhibition in collaboration with institutions such as the Royal Academy and the Prado. She began her career at Sotheby’s in the NY contemporary art department as an assistant, administrator and cataloguer. Gaëlle Porte holds a Masters degree from the program SPEAP founded by Bruno Latour at Sciences Po, Paris, and a B.A. in Art History and International Relations from the University of Southern California, Los Angeles.

Founder of the art project management agency LUCID. Jeanne supports and accompanies projects with the intention of making others feel and question the world. Until 2017, she materialized her fascination for visual arts, intercultural dialogue, and books in the Parisian bookshop and gallery Library of Arts, co-founded with Maxim Monti. Her sharpened eye is focused on discovering contemporary artists, highlighting current trends and creating social interaction. A committed woman, her projects engage in dialogue with the world to bring out a collective and contemporary lucidity. She currently collaborates with Thanks for Nothing, La Bourse Révélations Emerige and the curator Gaël Charbau.

After being top of her class of the Bachelor’s in management at the University of La Rochelle, she integrated the Master’s in art Market Management at ICART (Paris). During this program, she spent 6 months at Christie’s alongside the Director of the Press Department. She also worked for the Nahmad Contemporary gallery during FIAC 2019. She also spent a year in Denmark as an Erasmus student at VIA University College in a class of internationals. Since September 2019, she has been a junior project manager at Thanks for Nothing.

After a preparatory class for the “grandes écoles” (literary section), Clarisse studied international relations before attending Sciences Po Paris to study cultural policy and management. Following a year and a half as a strategy consultant, she chose to get closer to the contemporary art sector and solidarity (notably through a first experience in a contemporary art gallery) before joining the Thanks for nothing’ teams in September 2020.

Lara graduated from Sciences Po Paris in 2019, where she is currently pursuing her master’s studies at the school of Public Affairs, specialising in Culture. As part of an exchange program, she studied art history for a full year at NYU. This experience was an opportunity to nurture her interest in the links between the arts, politics and social development. She was also in charge of organizing the 2020 edition of the ECARTS student theatre festival. Lara has been an intern at Thanks for Nothing since September 2020.